Moving Hazards: How to Steer Clear of Overly Aggressive Drivers 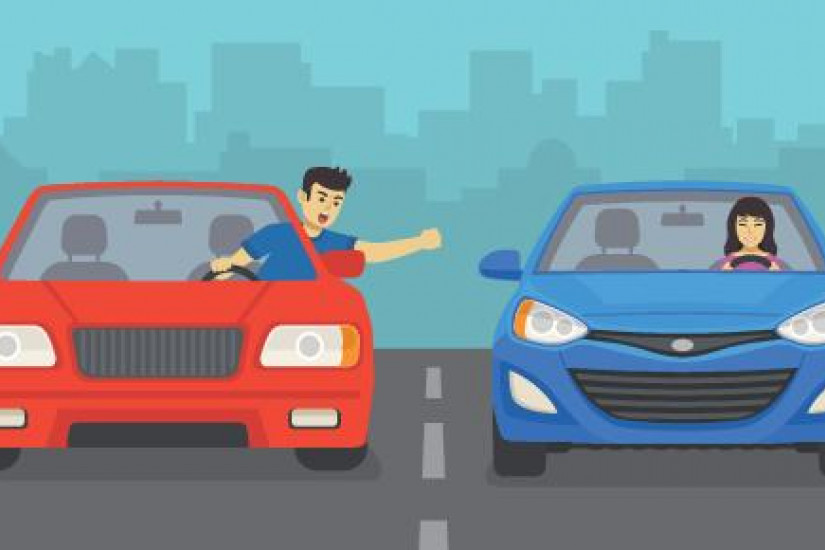 Everyone’s seen them. There’s no escaping them, really. Every day, somewhere on the streets, they are there, looking for holes, searching for weaknesses, trying to find some way of unleashing their pent-up aggression. No, I’m not talking about rabid grizzly bears, although you should watch out for those too – I’m talking about aggressive, dangerous drivers.

They come out of seemingly nowhere, racing up behind you, flashing their lights, white-knuckling the steering wheel, desperate to get to some location of great importance, such as Arby’s. And there you are, understandably annoyed, unsure of the best course of action. How do you deal with dangerous drivers? What is the best way to discourage them? And how can you keep from getting caught up in their wild shenanigans out on the road? We will reveal all, but first, I think it’s important to delve in the mentality of these drivers.

The Psychology of the Overly Aggressive Driver

What makes these people tick? Why are they the way that they are? We can speculate endlessly on what causes someone to drive like a lunatic on the road (run off the road on their tricycle as a child, perhaps?), but that would be a bit too much. Instead, we will imagine ourselves in the aggressive driver’s seat, so to speak.

Let’s say I’m an aggressive driver and I’m ignoring traffic laws and flying down the highway. Ahead of me, there is an innocent driver attempting to pass someone in the left lane, but they are doing only 10 m.p.h. above the speed limit, rather than 30, and they must move or be destroyed. It is an insult that they exist, really; they shouldn’t be there on the highway going more slowly than I am. How dare they! I’ll tailgate them and flash my lights… that will get them to comply. Surely they will be afraid of me… who cares if it’s highly dangerous, stupid and illegal? I have to get to Arby’s…

...maybe that’s a simplification. But the point is that people who endanger others just to get somewhere else marginally faster aren’t rational, and you shouldn’t treat them like rational people.

Dealing With Irrationality On the Road

So how do you, a normal person, who just wants to get from point A to point B safely and in a reasonable time, deal with an irrational, aggressive driver?

First of all, don’t engage. Don’t stoop to their level. In some ways, the irrational driver wants you to join in on their tomfoolery. They want you to behave like they do, because in their mind it’s all a competition and you are their rival. They don’t see you as a person; they see you as an obstacle. Realize that you aren’t dealing with someone reasonable. Reasonable people don’t gun right up behind others on the road and tailgate them to try and move one car ahead. Reasonable people understand that if the person in front of them hits the brakes hard, for any reason, a bumper could go through their head. So don’t play their games. It’s better to get over, to get out of the way, to avoid, than it is to engage.

Secondly, be aware of your position on the road. Are you sitting in the passing lane (aka the fast lane) rather than using it to pass? If so, consider getting over. It’s an easy way to avoid conflicts. The last thing you want is to get into it with some weirdo while you’re doing 75 m.p.h. on the interstate. Just take it easy, and let them get to wherever they are going a little quicker and feel great about themselves. It may be the only joy they experience in life.

Finally, if someone moves beyond irrational aggression to targeted aggression, you need to adopt a defensive driving posture and get away from them. Don’t speed, and don’t panic. If they continue following you and appear to be a threat, call the police when it is safe to do so. There have been too many crazy road rage incidents to believe that it never happens. Certainly, it is rare, but it absolutely happens, and, if it does, you want to make sure you stay safe. Don’t try and confront an aggressive driver. Call the police and tell them that someone is following you and being threatening towards you, then let them handle it.

Stay Safe Out There

People can be wild and unpredictable. It can be dangerous on the road, and it’s mostly because of the behavior of a few bad apples. It’s important to remember that the vast majority of drivers are people just like you – people who want to get where they are going safely and without incident. So don’t let the behavior of a few maniacs make you cagey on the road. Stay relaxed, stay safe, and remember: don’t play games with aggressive drivers. Let them go on their way. There are no prizes for getting to Arby’s first.