What Are Walkable Cities and Are They Feasible? 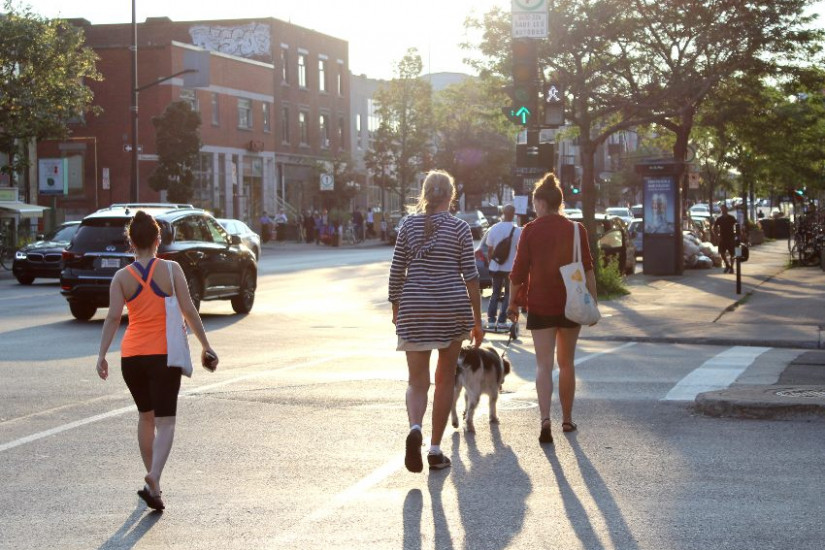 If you spend any time on social media, chances are you may have seen a meme or viral post about walkable cities recently. One of the more popular memes shows pedestrians walking along narrow strips of concrete alongside a massive ravine criss-crossed by wooden planks, to represent sidewalks and crosswalks, respectively. The ravine is meant to represent the space lost to motor vehicles, cruelly stolen from pedestrians and handed over to the driver.

Ahh, the driver. Perhaps the quintessential image of the 20th century is a person operating an  automobile. There's something magical about early pictures of drivers, in their Fords and Chevrolets, experiencing for the very first time the sheer joy of a roaring motor and an open road. The driver of yesteryear is an adventurous figure. A pioneer of sorts, exploring the possibilities of speed, of man in union with machine, his pedals and steering wheel an extension of his own body.

Today, we still, at times, romanticize the race car driver, in film and on television. But the regular driver, the common driver, has come in for some serious criticism. It is the opinion of some that the solo driver is, by nature, selfish. They take some space, and, as it goes in the argument for "walkable cities" they steal the road from pedestrians.

The supporters of the walkable cities movement often post pictures of cities before the introduction of motorways, idyllic scenes of pedestrians crossing streets without fear of speeding vehicles, antiquated garb and sepia tone distracting, perhaps, from the thought of the smell of horses and the glum slowness of it all. One worries, seeing this tendency toward overt nostalgia, that this tendency of thought will lead us back to before the invention of the wheel, when we lived in caves and didn't know how good we had it.

And yet, as one looks at the sobering statistics around pedestrian deaths in motor accidents, it cannot be denied that the proponents of walkable cities have a legitimate point: cars are dangerous, motorways do take up significant space, and pedestrians in some cities have been dealt a difficult hand. No one should have to feel unsafe or encumbered upon by or as a result of vehicular traffic, and there ought to be a middle ground between a totally unsafe, pedestrian-hostile city and one that bans cars completely. What does that look like?

A Problem In the Process of Solving

In many ways, the problem of unwalkable cities has been solved. What's left now is the implementation at scale across more cities. Simply put, more areas need more sidewalks with more crossings and crossing lights, better signage, and more refined delivery of information to pedestrians and drivers alike. Traffic systems, in many ways, are also information systems. Delivering that information to all parties involved in a traffic system in the most effective way is a key piece of the puzzle for traffic engineers, and it's something that we already see happening with ever-increasing efficacy in big cities in the United States.

True, all of these systems could be better. But factually, we cannot say that traffic systems as they are today completely disregard pedestrians and favor drivers; on the contrary, there have been many innovations to improve pedestrian safety over the years, and that goes beyond traffic signage and timed crosswalks. The technology in the vehicles we drive, from automatic braking to back-up cameras, continues to make both pedestrians and drivers safer.

So, rather than attempting to upend the apple cart and radically alter the way we build cities and design roads, we should perhaps focus more on improving the existing systems to the best of our ability and continuing to make cars safer. That is a more realistic and achievable proposition than making major urban areas car-free zones.

There are many instances where the hazards facing pedestrians and drivers are increased due to special circumstances, such as roadside construction, big events, and emergency situations. A company like Traffic Safety, which specializes in providing traffic services to manage the flow of traffic, designing detours, and providing road safety equipment, can play a critical role in keeping pedestrians and drivers safe during these circumstances.

It's one more way that traffic safety plays a role in our daily lives. By continuing to hone in on ways to protect drivers and pedestrians alike, no matter the circumstance, we will make cities more walkable —  and drivable —  for everyone.