A Dream of a Better Pedestrian Crosswalk 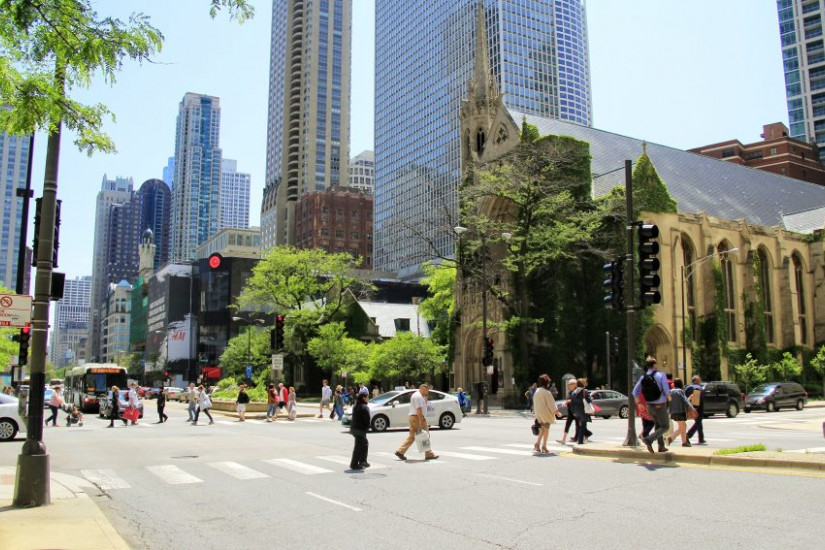 I had a dream about pedestrian crosswalks, while I was sitting on the tarmac at O'Hare. The plane was stuffed. Some guy with hiking boots on had his gargantuan feet shoved so far under my seat I could see his soles. We'd been sitting there for an hour already. It was raining and they had to find a crew to do something; it was never really clear what went wrong.

Maybe it was seeing the bottoms of those giant boots, but somehow I got to thinking about the last time I walked in Chicago. How I sometimes got intimidated crossing the big intersections. Maybe I'm a timid person, I don't know. I fell asleep in my window seat while the guy next to me complained about the airport to his wife.

A World of Pure Imagination

As I sat wedged against the window and slept, I dreamt of an intersection where pedestrians could cross in any direction, while all the cars stopped and waited for them. It would be polite, civilized, and modern. It would make all of our lives easier and we'd never have to worry about getting run over by a box truck again.

When I finally disembarked I excitedly told the cashier at Tortas Frontera of my invention. I called Walking Whirlpools, only to have my ego dashed when she told me they already exist. Not only are they real, having been invented many years ago, but they also have a slightly better name: pedestrian scrambles.

Overcoming the Blow to My Ego

As I consumed my Cubana sandwich and warm tortilla chips with red salsa (how can this be airport food?), I did a little research on these scrambles. Turns out they are exactly as I imagined. This type of intersection allows pedestrians a full light cycle to cross in any direction while traffic on all sides remains stopped. They're already in use in Chicago and pedestrians love them for their safety and convenience.

It was tough accepting that I did not invent this type of crossing. When I saw it for myself at Jackson and State, I had to wonder why there aren't many more intersections like it. They seem to be safer and more efficient as compared to standard crossings, reducing issues between drivers and people out walking. Pedestrian scrambles feel like a great choice for high-traffic areas, of which, let's face it, we have plenty.

The proof will be in the pudding; will Chicago become more pedestrian-friendly and explore innovative methods of improving intersections, like the scramble? Or will we all sit on the metaphorical tarmac of progress while my belated invention goes to waste?