Pedestrian Scrambles and Walking in LA 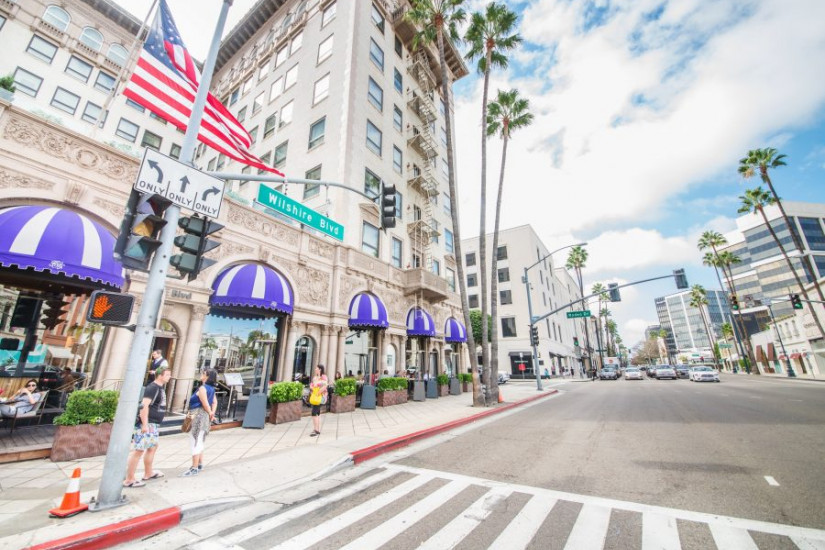 Pedestrian Scrambles and Walking in LA: Because Anything is Better Than Driving

If you pull up a live traffic map of Los Angeles during rush hour you will see what looks like blood coursing a circulatory system. The red lines are where traffic isn't doing anything; red means "stopped," "bad," "you're not going anywhere and get used to it," "you're about to miss your favorite show and you didn't renew your service so no DVR, sorry." In short, if there is a universally accepted truth in LA, it's that driving is something you do because you have to, like a root canal or sending a gift card to your least favorite cousin for their birthday.

The good news is, you don't have to drive all the time. Sometimes you get to walk. Ahh, that's better. On two feet, without brake lights glaring in your vision. Here's even better news: there's an innovative type of intersection making walking even sweeter. It's called the pedestrian scramble.

Have a Whole Intersection, You Deserve It

Did you drive here? You poor thing. Here, step into this lovely pedestrian scramble, where the light cycle makes all the cars stop and wait for you to cross the street. Now, I know what you're thinking: "hey, that could be me in one of those waiting cars!' Right now it's not, so relax

You can cross this intersection diagonally, just how you like your sandwiches cut. If you wanted to, you could even do a little dance as you cross, shouting "I'm not in a car, I'm not in a car!" Now that you're crossing safely in any direction without worrying about what all those cars are doing, you can experience what life might be like without traffic. Isn't it grand?

Leaving the Old Ways Behind

The La Brea tar pits are filled with extinct creatures that had some bad fortune. They were out for a stroll one sunny, prehistoric day and they went to the wrong water hole. In many ways, the transportation system of Los Angeles is similarly stuck in a pit. The car-first mentality that rules LA has put the sanity of drivers on the verge of extinction.

Smart ideas like pedestrian scrambles are more than one-off concepts. They help pave the way for a comprehensive approach to transportation that is less miserable for everyone. So whether you're a regular walker or just someone who enjoys a stroll from time to time, be sure to take a moment to appreciate the next scramble you encounter.

After all, the more people like walking, and the easier it is, the fewer people will decide to jump in a car. Pedestrian scrambles might not be the giant meteor that will make LA traffic extinct, but they're a nice start. And really, when it comes to erasing some of those red, squiggly lines on the traffic map, anything helps.