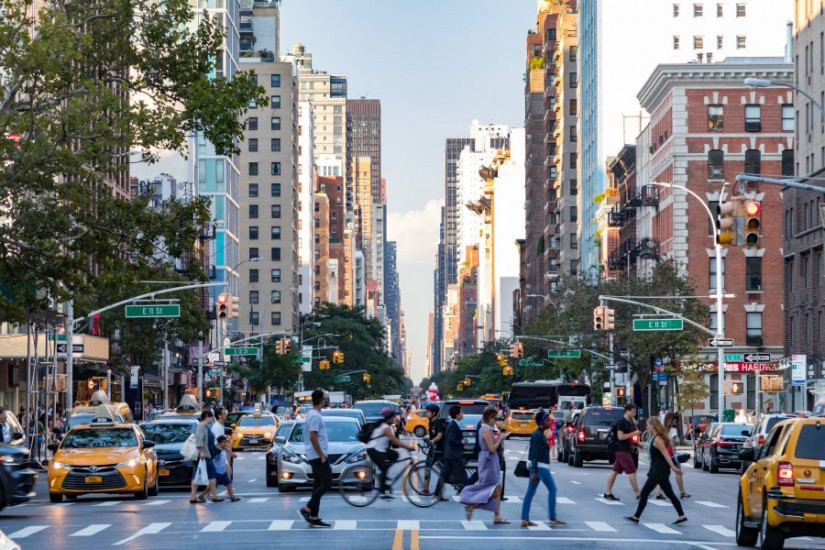 Face It, You're Bored On the Subway Again. Now Read About Pedestrian Scrambles

There's a rhythm to walking in New York. It's not stop-start, exactly. Sometimes, it's go, go, go! If you're moving quick, you get a nice pace going. You hit a few walk signs in a row, you zip through a crowded crosswalk while the caution hand blinks, a timer as enticing in its way as a yellow light. Some people slow down for them. Some people speed up.

The pedestrian is the ruler of the Big Apple. Sure, there are cars everywhere, but the walkers outnumber them and they don't care about their blaring horns and gesticulating arms. When you're walking in New York, you are the primary beneficiary of the transportation system, and if you're someone who loves to walk, as many New Yorkers are, it feels good.

That's not to say things are perfect, however. There are challenges, beyond the tourists walking inexplicably in bike lanes or stopping in the middle of a sidewalk to search for the perfect cheesecake place on their phone. Complicated intersections can be intimidating for even the experienced walker. You may even see a soul or two pull out one earbud and look from face to face, waiting to see who moves first. Fortunately, the pedestrian scramble is around to make things a little simpler.

Somebody just asked you for change, which you didn't have anyway, and then wished you a good day when you kept walking. You're still sweating from the last subway platform. It looks like it's going to rain and it could be one of those quick showers or an apocalyptic storm that winds up with flash flood warnings blinking on your phone while you hide in a wine bar.

You just need to make it a few blocks, but there's this crazy intersection ahead. What are all those lines? Why do they cross the street diagonally? Look, the walk signal is lit. And...people are walking in all directions. All the cars are stopped on all sides and everyone is just walking. Peacefully.

Horns are beeping-it's New York-but not at you. You're crossing the street safely. You've just enjoyed a pedestrian scramble. It cost you nothing and you gained precious seconds that could allow you to catch the express, so hurry up.

What do you care about? Well, if you like walking you should care at least a bit. It's a big, big city and there are many intersections that have benefited from the scramble. There's plenty to complain about in New York City, from garbage trucks parked on residential streets to the conspiracy to ensure tourists are always walking three abreast in the bike lane on Brooklyn Bridge, but walkers everywhere should appreciate what pedestrian scrambles have to offer. And everyone should appreciate that I got through this whole thing without a Midnight Cowboy reference.