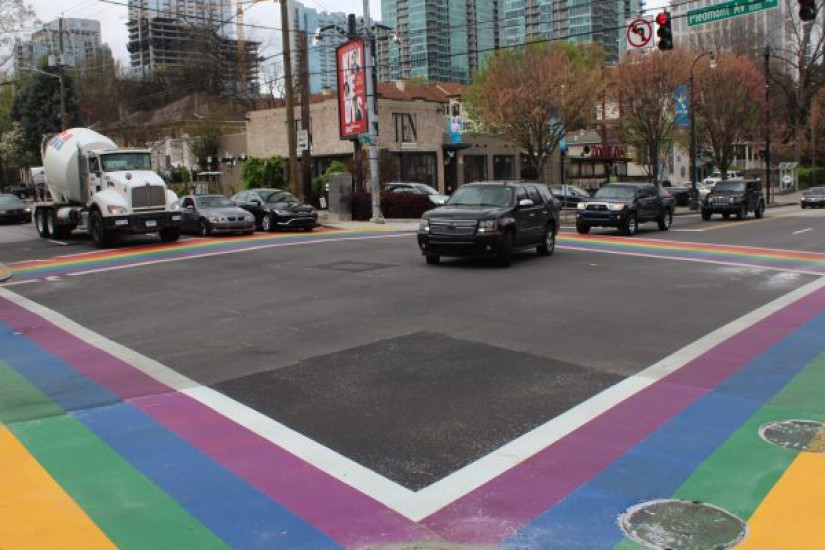 Pedestrian scramble. At first glance, this term may seem a little odd, like a two-word review of a dull egg breakfast. For anyone who walks or drives in the city of Atlanta, however, the idea should be an exciting one.

Let's start by looking at an ancient problem. Alright, maybe it's not ancient, but it certainly dates back to the early 20th century, when cars began to become widely used. People like to walk. It's the oldest way of getting around, and it doesn't involve parking, waiting in traffic, or paying for gas. People also like to drive, because it's faster.

Pedestrians and drivers come into conflict at street crossings and intersections, where the traffic of vehicles and pedestrians, well, intersects. There have been unfathomable amounts of money and time spent by government agencies and private companies in Atlanta and worldwide trying to make this seemingly simple interaction safer and more convenient for all. Like most complex problems, it's an ongoing one. The pedestrian scramble is one of the most innovative and helpful solutions.

Pedestrian scrambles are a simple way to allow pedestrians to cross intersections in all directions. Vehicular traffic stops on all sides, the pedestrian phase begins, and everyone crosses safely and efficiently. It's a simple concept that can completely change the way pedestrians and drivers interact here in Atlanta. With clearly defined phases for vehicle and foot traffic, it's easier for everyone to know exactly what they should be doing and when.

Why You Should Care

Perhaps you don't walk too much. After all, Atlanta remains very much a vehicle-centric city. If that's the case, allow me to ask you how you feel about those other people in cars. The ones you don't know. The ones who are apparently watching Netflix on their phones while driving downtown. The ones with duct tape over their smashed out turn signal lights. Yeah, those drivers.

Now imagine they were walking instead, with their car safely in a garage or being sold at an auction. Wouldn't you rather they have two feet on the ground than one on the brake pedal every second whether there's a reason to brake or not?

When traffic planning favors pedestrians it encourages more foot traffic, which lightens the load on the road warriors of the ATL. Perhaps most importantly, pedestrian scrambles make the whole traffic system more efficient. And when you're trying to beat the worst of rush hour on a Friday afternoon, could you wish for anything better?